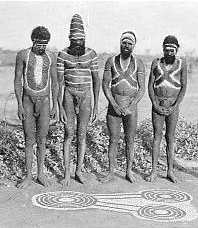 Male initiation is a rite of ceremonial passage from childhood to adulthood and was a highly celebrated process by which surrounding tribes and clans culminate together to celebrate the next phase of life for a young man. Celebrations often lasted weeks and were conducted at sacred sites called 'Bora's' within the Kamilaroi nation.  The term 'Bora' is also referred to as the actual ceremony and can be used intermingled between the 'place' of ceremony or the actual ceremony itself.

It is understood that females also went through an initiation process. However, recorded evidence is very rare with written testimony of male initiation only first recorded in the 1870's by colonialists Mathews, Howitt and Reverend Ridley. After 100 years of settlement and the demise of language, identity and ceremony, the important rite of passage had started to disintegrated as time evolved.

During a time of initiation within the Kamilaroi nation, boys were ushered into manhood via a process of formal ceremony conducted by medicine men (Wirringan) and wizards (Koradji) who took pride in installing the 'Bora' celebration. Across a period of time boys would learn to hunt, make a traditional fire and carve customary woodcraft with the Elders of the tribe or clan. Once learnt and the Elders were satisfied that the boys were ready, the formalities of the nightly ceremony was to begin.

It is during this time that nightly singing, dancing and the adornment of body decorations took place. Women and children were often discounted from the rite of passage process but did play a vital role of telling and retelling stories of ancestral beings to the young uninitiated boys. Most parts of formal ceremony were restricted and conducted to only those who were being initiated and the male Elders. This process of limited viewing was known as "secret-sacred".

Initiation was completed with ritual markings made upon the skin of the upper torso of the uninitiated boy, using stone knives and the process of a tooth avulsion from the upper jaw on the right hand side of the face. The boys were also presented with a white rock which was placed in a possum skinned bag hung around the boys neck which he retained for life. This was a particularly sacred object and had great meaning in the initiation process.

A complete recall of ceremonial events can be read on the following website. This is a true account from K. Langloh Parker in 1905 of a traditional ceremony from the trainings of a young boy through to the initiation process within the Kamilaroi nation. 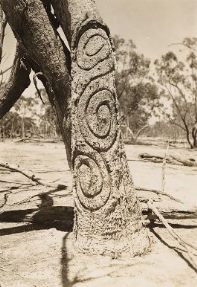 Kamilaroi tradition sees a ritual of circular rock formations on the ground used as part of the rite of passage ceremony. These circles are powerful symbols representing a totem or kinship. Trees surrounding the ceremonial site have often been carved to form part of the celebration.

There are 4 types of circular designs used in 'Bora' ceremonies. These include; curvilinear lines, chevrons, figurative images and scrolls or circles.

Other carved symmetrical rings on bark stripped trees have also been identified as part of  burial sites indicating a grave near by.