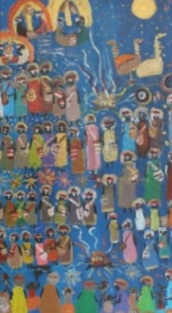 The Kamilaroi nation is one of the 4 largest Indigenous nations in Australia. The expanse of land is over 50 000 kms with a variety of terrain and landscapes evident across the area. Watering holes and rivers (Barwon River, Namoi River, Peel River and Darling River) were valuable tributaries for the tribes people providing food, a place of shelter and of course vital water for survival. Water has been identified as a crucial element of traditional Kamilaroi life. Variations in names of the Kamilaroi nation can be identified as:
Disparities of name and spelling became apparent with different interpretations of language which were then recorded for public record by European settlers.

The Kamiliaro nation was initially made up a number of family tribes which all co-existed on sub divided lands which sustained them as they hunted and provided for their extended families. Trade of artefacts manufactured from local wood varieties (Myall wood) and knowledge between the respective families was shared and a symbiotic nature existed between all. However, the Kamilaroi tribes people were fierce worries when placed under undue pressure.

Language across all Indigenous nations is as diverse as the land in which they live on. Different dialects and distinct language phonology is evident within the Aboriginal tribes, with over 250 different Indigenous languages once being spoken across Australia. Through colonisation and the theory of assimilation, language skills were lost in most nations across Australia. Fortunately, the language of the Kamilaroi nation, 'Gamilaraay' is now being taught within schools and is growing in strength, as new and future generations are exposed to this form of national identity. Please review the 'Language' tab on this website for further information regarding this specific topic.

Tribes people of the Kamilaroi nation were hunter and gatherers, with distinct male and female roles evident within their day to day lives. Males were the hunters of kangaroos, emus, iguanas, possums, echidnas and bandicoots; the collectors of fish, crayfish, muscles and shrimp and in charge of the overall preparation of food. Whilst females undertook the role of cooks and the gatherers of vegetables such as yams and other root vegetables. The woman were also in charge of raising the children, teaching them stories of the 'Dreaming' and recounting songs and dance.

Marriage, initiation and ceremonies were an important part of tribal life. Each had specific customs and traditions which helped shape the identity of the Kamilaroi nation. Spiritual life and these important traditional customs often derived from the incarnation of the landscape which could be found within their nation. This could be seen as recognisable commodities from the land such as rock formations, plant or animal form. These are often evident in rock carvings and art work within the the tribal land. Please review the 'Totems' and 'Ceremonies' tab on this web site for further information regarding these specific topics.
﻿Kamilaroi - A Nations Identity website designed and compiled by Michelle Carpenter. Macquarie University student number 43601723﻿