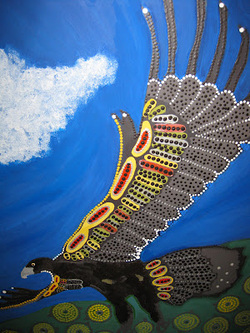 Totems play an integral role in Aboriginal identity within the Kamilaroi nation. At birth, each child is associated with a totem which remains with them for life. A totem holds significant importance for each individual,as they hold the important responsibility of enduring the identified species for generations to come.

Links between the spiritual world, creation time and the living world (land and creatures) are associated with totems which are passed down from mother or father, given by a spiritual sign linked to the spirit of the ancestor that the totem represents.

In 2008, the Queensland Studies Authority, a division of the Queensland Government, released a detailed report explaining the rites and customs of Indigenous populations. The document uses the following example of a totem birth rite to forge your understanding;


"a goanna may cross the mother’s path during her pregnancy. The child is then seen to be linked to the Goanna Dreaming or the ancestor Uudinaddalli and, as such, has a special relationship with the goanna and with the physical location where the mother saw the sign."

Totems can be identified as either an animal, a component of a natural landscape, a plant or even a weather pattern. Knowing ones totem allows for an individual to understand their own relationship to a language group and to other Aboriginal people, giving them a connection to their sacred country. Those individuals who share the same totem often share a special bond.

Kaputhin the Eagle associates itself with the following spiritual concepts:

Within these two totem moieties, subtotem groupings exist. These were derived as a class social system from matriarchal lines of descent allowing marriage and relationships to take place from other parts of the Kamilaroi nation.

The sutbotem groupings are aligned with animal totems (examples stated below) within the Kamilaroi nation. These are represented in the following:

Rulings for marriage within the Gamilaraay language grouping, follow the subsequent decrees

﻿The final system which is looked upon within the correct alignment of two people for marriage of the Gamilaraay people, is the 'Class Sub Group'.  This gives way to a spiritual and physical connection, acknowledging the past, present and future, proving that the society was and is caring of long-established time.

Class groupings within the Kamilaroi nation are as follows:

Two examples of a union of two Gamilaraay people from the Kamilaroi nation in a men and women's social system is as follows;


For further reading on this fascinating rite of marriage please read the following link http://www.stoppilligacoalseamgas.com.au/?p=1831 as Mr Paul Spearim recalls the importance of totems in the culmination of marriage as a Galmilaraay man.